Skip to main navigation Skip to content
Save the date for Empty Bowls 2023!

DONATE
Her Spirit Got Her Through
[highlight_columns] The first night in my apartment was such a blessing.  I cried and cried that night because the struggle is so real.  This was such a great thing.  I have so much appreciation.

Chronic homelessness is enough to depress even the most exuberant soul. Which is how anyone would describe Shuntiya Sharief.

For three long years, she struggled with life on the street and bouts of addiction. Still, her spirit would not succumb to the undertow. Each morning, she pulled herself up until one serendipitous day she found Sarah’s Hope and the Front Door Program. In just a month, she had a place to live and life started to look up.

With support from the counselors at Sarah’s Hope, Shuntiya got a job at Shoppers Food Warehouse. A job she lost when an old warrant for her arrest came to light. Again, Shuntiya didn’t buckle. With guidance from the Front Door staff and Employment Navigator, she was able to get the charges expunged and allowed to start over.

Desperate to avoid the homelessness she had known, Shuntiya worked with case managers at Sarah’s Hope to secure another job. The Navigator helped her get hired at the Powell Recovery Center where she began as an Assistant House Manager. In three months, she was promoted to full-time House Manager, discharged from the Front Door program, and was paying rent for her own first apartment.

“The first night in my apartment was such a blessing. I cried and cried that night because the struggle is so real” said Shuntiya.  “It was such a great thing. I have so much appreciation.”

Shuntiya has been in her apartment for three and half years now. She experiences the joy of helping others in her continued employment. She is an asset to her employer and she is especially proud to be able to make her children a priority and give them the care they need and deserve. 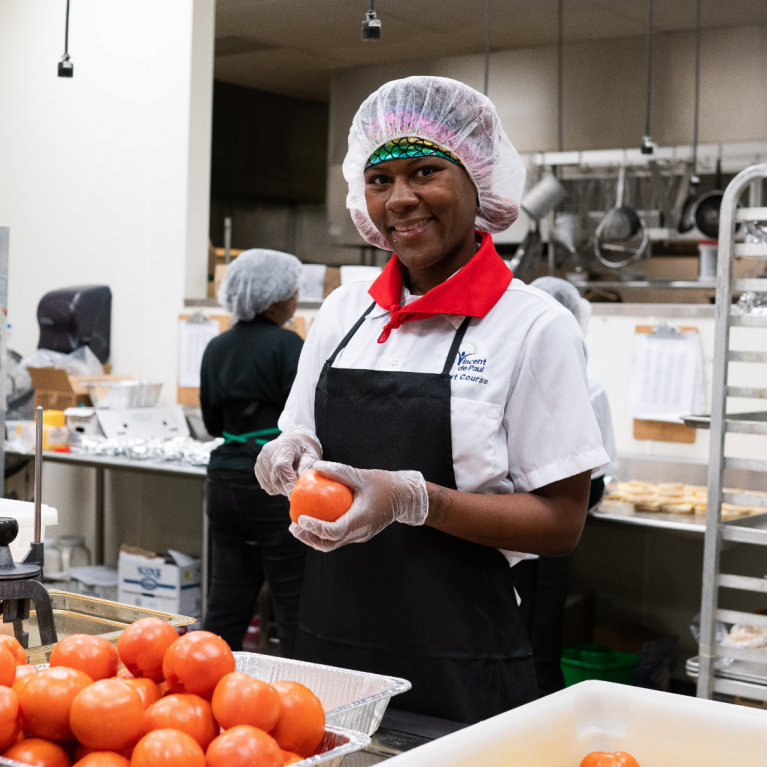 Shay’s Story
When Shay first walked through our doors, she wasn’t just hungry, she was empty. Not only did she not have enough to eat, she had no one to count on.
Read More
Shay’s Story
Shay’s Story

Find out what SVDP is doing in and around your community. Sign up for our newsletter.